My fingers hover over the keyboard. I have so many thoughts, so many reactions.  Sometimes I even type them out, giving fleeting voice to my opinions, but always—almost always—I think better of it.  I hit delete.  I watch as a blinking cursor erases my feelings one letter at a time.

I don’t think I need to say that it’s been quite the week. We all have feelings and many of us are expressing them—some in beautiful ways, some in hateful, many somewhere in the middle.  Mostly, I have resisted expressing my political opinions anywhere on the internet.  And after all that has happened, all that may happen, I wonder to myself why and if such a decision been wise.

The why is fairly easy: I don’t want to fight. I don’t want to get into it with anyone—start a battle that no one will win.  I don’t want to hurt anyone’s feelings.  I don’t want my words to be mis-taken.  There are people in my life whom I not only dearly love, but also deeply respect who vote very differently from the way I do.  I live in a predominantly red community.  Why risk a potential rift?  I hate rifts.  I abhor violence.  It feels, at this moment in time, that we seem unable to speak to each other civilly—that a disagreement about ideology immediately devolves into name-calling.  Demeaning the value of each other as humans whether they be called “deplorable” or “nasty” seems to be commonplace.  I don’t want to participate in this.

When I was writing my memoir about my diagnosis and experience of having CFS a decade ago, I agonized over how to portray certain people in my life—people who have hurt me excruciatingly.. I wasn’t sure that being candid was the right thing to do.  Who might I hurt by speaking my truth?  Was it worth it?  I also didn’t want to use “being authentic” as an excuse for calling people out in a childish way.  Even when I wrote my first novel, I worried how members of my family would interpret certain aspects of it.  Would they be upset?  Would they be mad at me?  I can’t stand it when people are mad me.  It feels like attempting to get a foothold on crumbling land beneath me.  It feels devastating and lonely.  So I have censored myself—a lot (it’s actually part of the reason I have not submitted my work as much as I should).  Some of it has been wise.  I have been grateful when I have held my tongue in situations in which I would have liked to spit fire, but I wonder where exactly the line is.  At what point does silence stop being golden and start becoming a prison warden?

Well, I guess, that point is now. People say that some of us are taking this too personally.  But it is has become personal.  My opinion about what constitutes good government policy differs greatly from that of President-Elect Trump.  That would have been enough for me to not vote for him, but it wouldn’t have made it personal.  What made it personal, was the fact that I, and many women whom I care about, have been victimized by men, and the words and actions of Mr. Trump have ripped open those wounds.  The fact that so many people voted for him feels like an endorsement of a man’s right to hurt and debase women at will.  I know this is not true.  I know that if you are reading this and you voted for Trump, you were not thinking about me or any of my friends who have been through similar things.  You were thinking about Right to Life or the next supreme court justice or repealing Dodd-Frank or any number of practical reasons—maybe even personal reasons—why you felt that Trump was the best choice for this country.  People are suffering and they saw this man as a way out.  I get that.  I can respect that.  But I also weep for it.  And I don’t know how I am supposed to forget all the varied hateful things that Mr. Trump has said and give him my support now.

I have been silent. I have been fearful.  Today, I am saying a little.  How much will I say in the future?  I don’t know.   A part of me wants to speak for myself and for others who cannot, but I still don’t want to start a fight.  I don’t want to cause irreparable damage.  Honestly, I don’t want to put myself in the line of fire.  A part of me just wants to meditate and pray and spread love with smiles and music—and I will do that.  But is continuing silence wise?  Is it responsible?  Can anything be solved without respectful discourse?  I don’t know, but I heard a stat this morning that chilled me to the bones.  Approximately 49% of eligible voters did not vote in this year’s election.  Almost half of the people who have the ability to help decide how we will treat our children, our fellow citizens, our country were completely silent. 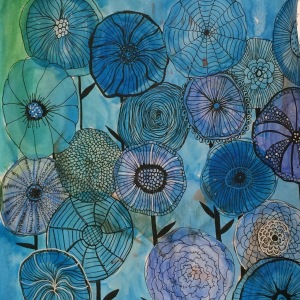 Curious about working with me? Set up a free 30-minute discovery call! Email me at contact@dianaklein.com

Click here to join my email list and get up-to-date info on my offerings and the TLC Newsletter in your inbox each month!

The Land on which I live and work is part of the traditional territory of the Choctaw people. I pay respect to the Choctaw peoples past, present, and future and their continuing relationship to their ancestral lands.