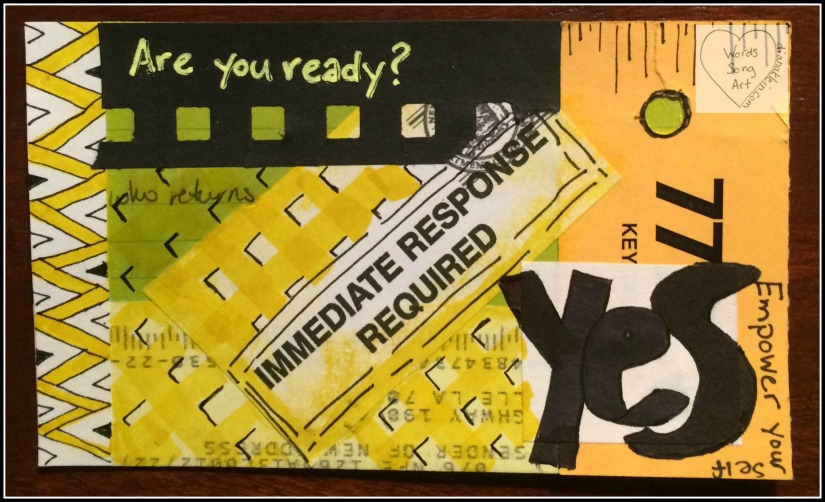 I was recently going through some old mixed CDs—you know the things we made back in the dark ages before Spotify? Anyway, several of the CDs were titled with particular emotional tones like sad or contemplative, so that I could listen to them when I was in the corresponding mood.  One of the CDs I came across, however had no such label.  I gave it a listen, and remembered that it was my creativity playlist!  It’s a bunch of songs that for one reason or another made me feel encouraged to be artistic—to write, to sing, to make things.  And I realized, giving it another listen, they still do.

There’s a lot of music from the soundtrack of The Lord of Rings: The Return of the King on it which is not surprising because much of my first manuscript was written with Howard Shore’s orchestral brilliance pumping into my ears.

There’s also two songs from Stephen Sondheim’s Sundays in the Park with George—one (Move On) taken from the original cast recording of Bernadette Peters and Mandy Patinkin and the other (Putting It Together) a cover and partial rewrite by Barbra Streisand.  These tunes support me in my creative pursuits because “art isn’t easy” and even though “there’s nothing that’s not been said”, it hasn’t yet been said by me.

It’s interesting to me that there are two songs about vulnerability: BareNaked by Jennifer Love Hewitt and I’m Sensitive by Jewel, but it shouldn’t be surprising, after all, how else can you be when making and showing your stuff, if not open and vulnerable?  I particularly like Jewel’s determination to embrace her delicate senses by saying “Please be careful with me.  I’m sensitive and I’d like to stay that way.”

There’s one actual folk song (Fair and Tender Ladies sung by Rosanne Cash) and another (When Love is New by Dolly Parton and Emmy Rossum) very close to that style which, for me, always seems to get inside an emotion, but often with a sort of matter-of-fact kind of practicality that I like.  I guess some might find lyrics like “Love is pretty when love is new, like a blushing rose in a dazzling dew” and “Come all ye fair and tender ladies, take a warning how you court young men” somewhat cynical, but I find the words and the voices that sing them wonderfully evocative.

The remainder of songs are basically singer-songwriter-y. There’s Dido’s reminder that I need to grab living with both hands in Life for Rent.  And Eva Cassidy’s poignant cover of Sting’s Fields of Gold.  The drums and vocalization at the beginning of Rubén Blades’ Patria are enough to get my creative juices flowing.  And Joan Osborne’s One of Us makes me want to try look at things with God’s eyes and, to be honest, I really just love belting that chorus. That I Would Be Good by Alanis Morissette prompts me to remember my intrinsic value as a person, not for how I look or what I can do (even and especially artistically!)  And the lyric, “That I would be good, if I got and stayed sick” never fails to give me chills.

And of course, no playlist can be complete without a rousing call to action song—in this case, Defying Gravity from the musical Wicked because “Everyone deserves a chance to fly.”

Recently, I added one more song to this list: Emily Maguire’s Start Over Again—because, in most situations in life and almost always in creative ones, I find myself needing this advice “Go Slow.  Be kind.  Be wise.  Start over again.”

What about you? What music makes you feel creative?  Do you have a playlist?

This week I was searching in my local library’s web catalog for a book by Alice Hoffman.  They didn’t have what I was looking for, but instead I found The Book That Changed My Life.  Don’t you love that about libraries?  Whether you’re online or in the stacks, you can look for one thing and discover gems you didn’t even know existed.  Of course, that usually means that by the time I get to the circulation desk, my arms are overflowing with items that I will never get a chance to consume in the time they are allotted to me.  No matter.

The Book That Changed My Life, edited by Roxanne J. Coady and Joy Johannessen, is a collection of essays from celebrated authors (mostly of fiction) about the book, you guessed it, that changed their lives.  This got me thinking two things: a) How, on God’s green earth, can anyone choose only one book?  And b) To which book would I assign that distinction?  As I dipped into the essays, I found that several of the authors couldn’t limit it to one choice either, so there’s that mystery solved.  But I was surprised to find that not all of them designated novels as their book of choice.  There have been a number of nonfiction texts that have made a huge difference in my life—many of them spiritual or philosophical—but they would never be at the top of the list that jumped to mind when I asked myself the question.  I have learned so much from novels—about the world, the past, myself, that I suppose I think of them as the best textbooks for the school of life.

My sister (eleven years older than I) started reading The Complete Works of O. Henry to me when I was seven.  This book pretty much ruined me for just about all other short stories.  I loved that there was always a kicker at the end, ironic or not.  We never finished a tale with me thinking “Okay, so what’s your point?” which often happens when I read short fiction now.  My favorite story was Springtime a la Carte mostly because it begins:

It was a day in March.

Never, never begin a story this way when you write one.  No opening could possibly be worse  It is unimaginative, flat, dry, and likely to consist of mere wind.  But in this instance it is allowable.

It changed my life because it was funny and irreverent and it felt like a personal invitation—as though this man from almost a century earlier was holding out his hand and saying, “C’mon, Diana.  It’ll be fun.”  I think that’s when I knew I wanted to be a writer—not that I thought I could or would ever be good at it, but that, even if I wasn’t ready to admit it to anyone (least of all myself) this was where some part of my passion lay.

I still wasn’t ready to commit to my creativity when I read My Name is Asher Lev by Chaim Potok in my early twenties.  It’s the story of an observant Jew who can’t stop himself from becoming an artist, and further, cannot turn away from the path his art is determined to take—which, in part, is to paint a portrait of his mother entitled The Brooklyn Crucifixion—despite the injury it will cause to his relationship with his community.  I love this book because the protagonist is earnest and really wants to do the right thing, but he knows he has follow his path, despite the difficult consequences—to do otherwise is to be false in the deepest kind of way, and, in a fashion, to turn away from God.  I love the description of Judaism, the rituals such as praying over a simple glass of orange juice.  I love how the book starts.  It’s as though you are walking into a room and hear a snatch from the middle of a fascinating conversation, and you can’t help but want to go back to the beginning and get the whole story.  This book changed my life because it taught me about how close artistry can be to spirituality (or even the same thing?).  It whispered to me about things I might like to do with my life—true things, literary things, small, but powerful things—and it wouldn’t stop whispering.

Douglas Adams’ The Hitchhiker’s Guide to the Galaxy first came into my life as an abridged book on tape.  I think I was about ten, and this science fiction masterpiece blew the roof straight off my mind.  It was as though Adams had given me a crystal, and instructed me on how to hold it and take it in.  Instead of just admiring one side, I was meant to turn it—just a little—and then consider it from this new angle.  And I was meant to do this again and again, over and over, becoming aware of how unfixed an idea or a reality might be.  The book was also really funny.

I read and re-read Beloved by Toni Morrison when I was 16.  Its story about an escaped female slave several years after the Civil War taught me about beauty and horror.  There was a lot I didn’t “get”, but that didn’t bother me.  When I read an earthy and lovely passage about the main character kneading bread, I found a porthole into the life of a woman whose experience had been so different from mine and I wanted to hold her.  I didn’t know books could do that.  I was glad to learn.

Hello and welcome! I am a mindfulness meditation teacher, certified in 2021 by MMTCP--a program led by Tara Brach and Jack Kornfield. I also write and make textile/mixed media art.

Having lived for over 25 years with illness, including chronic fatigue syndrome and cancer, I am familiar with challenges and am committed to finding ways to live with more joy and less suffering!

Register here to join me each Saturday for a weekly drop-in mindfulness meditation class over Zoom!