I think there has never been a better time in history to be a maker of art and crafts. There are so many glorious books and fascinating tutorials out there all just waiting to be salivated over.  Walking through my local arts and crafts supply store, I am bombarded with one exciting possibility after another.

And all of this is great, except for this balloon-popping truth: I can’t have it all. I can’t do it all.  At some point, I am going to have to choose.

Which can be tough. I think most crafters have been in this situation: they start a project with gusto, only to have it turn from something they were excited to begin, into a chore they had to finish . . . at some point.  Some people deal with this problem by simply junking the un-fun project and moving on.  I have done this, on occasion, but, for me, it’s even less fun to waste resources.  I know, some unfinished projects can be repurposed, but then that can turn into another uninspiring task.  In order to avoid all this, I’ve recently begun paying a lot more attention to how and what I’m feeling while I’m crafting, so that I can understand what I like and don’t like about a given process and subsequently choose projects that reflect those preferences.

For example, I finally decided to sew a duck, based on a pattern from Amy Adams’ Country Side Softies.  This is one of many, many books I’ve bought because the ideas are so cool, and I just have to try them and then proceeded to spend many, many years . . . not trying them.  Anyway, as I began, I could feel the tension building inside of me, Is this really what I should be doing? Is this really what I want to be doing?  But as I started to just pay attention while I worked, I found myself relaxing.  I realized that what excited me were the fabrics, bringing together coordinating patterns and colors.  Also, I was really happy doing the embroidery, and admiring it as I stitched along.  I wasn’t super happy with the duck itself, though.  The beak was too long, and I felt like there was more I wanted to say artistically that couldn’t find a home on this little canvas. Alright, I thought, good to know.

Later in the day, feeling tired and bored, I began looking around for something else to work on, but nothing seemed to grab my fancy until I remembered an article by Linda Willis in the January/February 2015 issue of Cloth Paper Scissors about making an iPad pouch from a piece of embellished, raw-edged quilting. From my earlier run in with the duck, I knew that playing with different fabrics and embellishing with embroidery would be fun.  I was a little unsure, however, when it came to the matter of  raw edges.  I am the daughter of a master quilter, and raw edges (when a piece of fabric is topstitched, leaving its edges to fray at will) is something we just do not do, but it’s become a popular look in textile art (it also takes less time!), and I wanted to see how I felt about it.  So I went for it. But, instead of stitching the piece in straight lines on the sewing machine, as instructed by the article, I decided to hand quilt circles through the top layer, a felt middle layer, and down into the backing.  I quickly found out more things during this process: a) I needed greater overlap for fabric pieces than I had allowed for (oops!)and b) though the circles looked cool, sewing as directed would have minimized the fraying of the edges and made everything more secure. 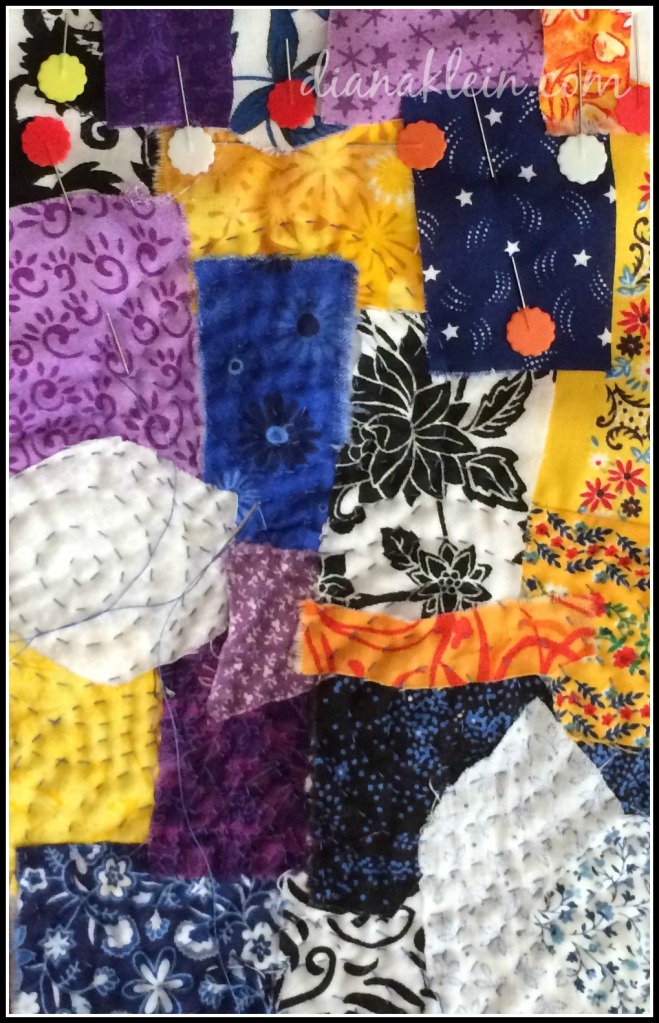 Alright then, on to the embellishing! I sewed on a little rectangle bearing the word “Believe” in fabric marker, which I then outlined with backstitch.  Then I did a lot of embroidery and a little ribbon work to hide those pesky spaces where the fabric did not quite meet, further lock down the fabric, and just because it’s fun.  Once I got the purple ribbon and the gold embroidery floss on there, I realized that those are LSU’s colors which, given the fact that I live in Louisiana (and it’s football season), I see a lot of around here.  I decided to dampen down the school spirit with a few blue and silver beads and some sequins.  I think that helped quite a bit, though when I look at it, I still can’t help thinking Go Tigers!

Finally, I zigzagged the edges of the piece on the sewing machine and then sewed it together to form a pouch, complete with a Velcro closure. The finished product is pretty small.  I can just barely get some index cards into it.  And it’s not something that will stand up to a lot of wear and tear—partially because of the embroidery, but also because of the raw edges.  Yes, the jury on seaming is in for me: I suppose in some art pieces, raw would be better, but in general I prefer finished.  They are simply more durable—and neater.

There’s a lot I like about the pocket though: It reminds me again of how magical I think hand quilting is (even when the stitches are uneven). I love the way the blue thread pops off the lighter fabrics and melts away into the darker ones.  I love the texture created by the stitches—the small hills and valleys.  And I enjoy the feeling of quilting and embroidering—weaving a needle through fabric, pulling thread up and down, watching as the many small stitches add up to something so much more grand than the sum of their parts. 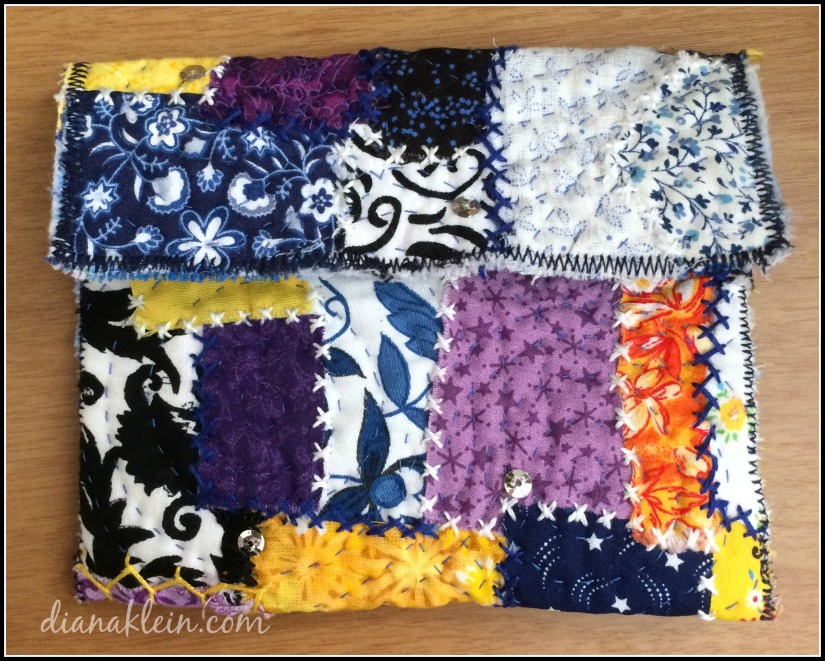 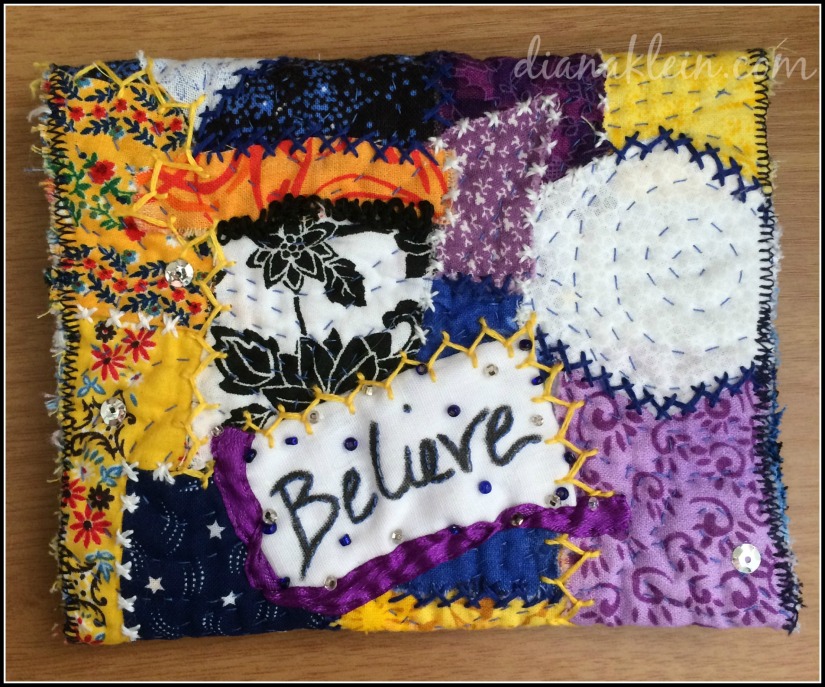 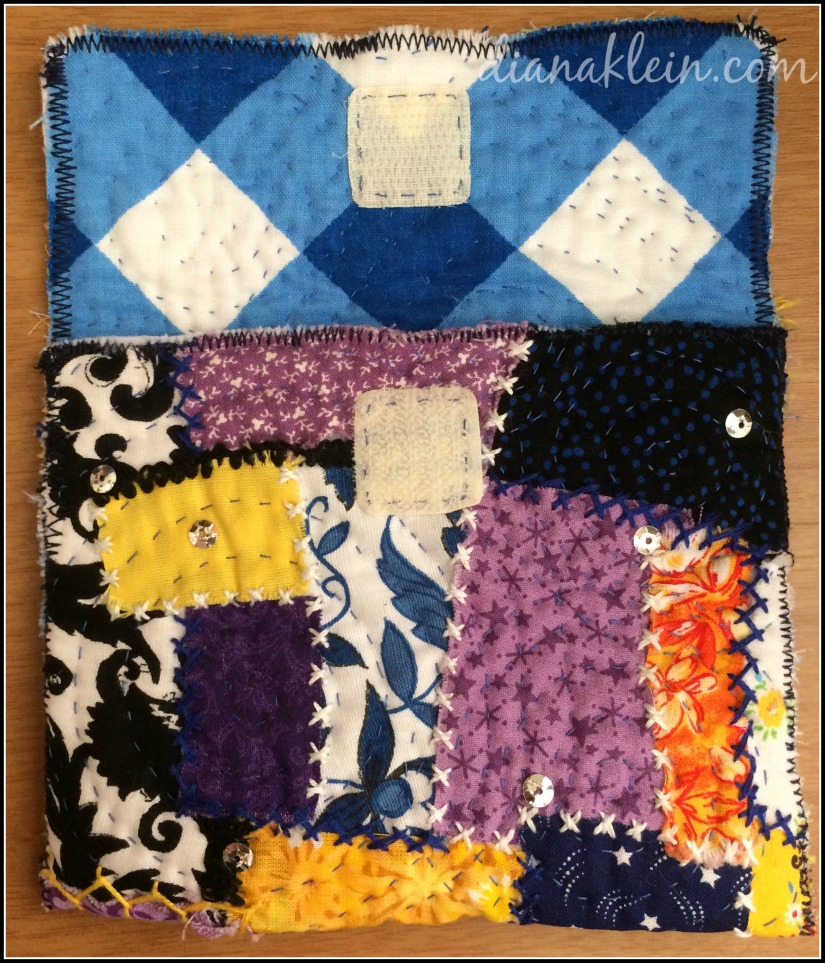 And I love that the pouch itself makes me think of Rita, a friend who died some years ago. She made God’s pockets for an entire confirmation class one year.  They were unembellished fabric pouches meant to be a place to house notes about things a person wanted to hand over to God.  It’s a neat idea.  I’m not sure that’s what this is for, but I am happy to note that this pouch did not turn into something for me to finish.  It was something I got to watch evolve.

What about you? How do you decide what to craft? Do you ever get overwhelmed by all the choices out there?

If you enjoyed this post, please consider sharing it with a friend. Thanks! 🙂

I am a mindfulness meditation teacher, textile & mixed media artist, and writer. View all posts by Diana

6 thoughts on “Confessions of an Overwhelmed Crafter”

Hello and welcome! I am a mindfulness meditation teacher, certified in 2021 by MMTCP--a program led by Tara Brach and Jack Kornfield. I also write and make textile/mixed media art.

Having lived for over 25 years with illness, including chronic fatigue syndrome and cancer, I am familiar with challenges and am committed to finding ways to live with more joy and less suffering!

Register here to join me each Saturday for a weekly drop-in mindfulness meditation class over Zoom!

Day 30 of #septtextilelove ! I got lost over the last week and didn’t post much, but I couldn’t miss this last day when we are asked to repost a favorite from a fellow participant. There are so many amazing posts and I am grateful to @seam_collective for organizing this challenge so that we could all connect in this way. I choose this photo from @power.beth because it’s not only a beautiful piece, it’s a lovely photo and the rest of her feed is just as yummy!
Loading Comments...
%d bloggers like this: