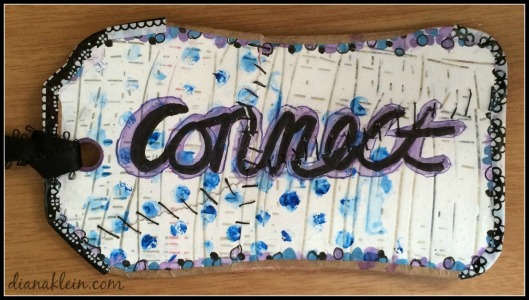 This is a little art card (a part of a larger project that I plan to post about in months to come).  I made it a few weeks ago and subsequently tore it up some days since. Why?  There’s no very good explanation.  It was mostly because I was having one of those moments in which I wanted to lash out and this is the part of the universe that got it.  The card wasn’t precious.  Just an inexpertly made little piece of almost nothing made from cheap supplies and leftovers.  It wasn’t  big deal.

But I was a little sad. I had liked the little piece of almost nothing.  And the irony of my destroying a card bearing the word connect was not lost on me.  I have had some difficulty connecting—particularly here on this blog (it’s been almost a year since I last posted) and even more in other venues—especially considering the current political climate and the fact that tomorrow is the anniversary of the terrorist attack that took the lives of almost 3000 people—including my brother.

I often feel that talking about my brother’s death is self-indulgent (though this may be untrue), and I’m not even sure how many of my social media friends even know that he died on 9/11. I don’t want to burden them, or bring attention to myself, so I say nothing.  On Facebook this morning, I began to see the commemorations, and I thought, “I guess I’ll be logging off for the weekend.”  Some people will use this anniversary as a call to arms, a reason to be angry, to exclude and to hurt others.  Some people will aggrandize their own connection to or participation in the events in order, perhaps, to make themselves feel bigger somehow.  I usually stay silent about these things, too.  I reason that everyone has their own viewpoint; I cannot dictate how others should feel or react.  People should not have to tiptoe around me and my feelings.  Even if many of the posts in my feed make me nauseous and angry and sad, I say nothing.  I don’t want to fight.

And that’s still true. I don’t want to fight.  What I want to do is connect.  Yesterday, I dug the four shards of my little piece of almost nothing out of the garbage, and I sewed it back together with black thread and ugly stitches. 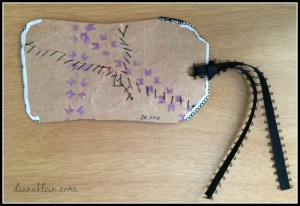 This is how reconnecting happens: with small, awkward steps, with the knowledge that damaged ends will never match up perfectly, and with the acceptance that you may always see the place where the break occurred.  The funny thing is how strong my little piece of almost nothing is now.  The stitches have reinforced it, making it, in some respects, both more durable and more flexible.  Also, I like it better than I did before I ripped it up.  Which again, is funny, because I was ashamed when I did it—that I had let my temper, my grief get the better of me.  I feared it was a sign that I had not progressed as far as I had thought or hoped, that I was less than, once again.  But I remember now, that we all have those moments—and we can all rebound from them.  We can, with a soft and open heart, rescue those precious bits we think we have lost, come home, and reconnect—if only, but possibly most importantly—with ourselves.

Hello and welcome! I am a writer, harpist/singer, artist, and crafter living with chronic illness. My goal is to live joyfully and wholeheartedly through compassion, mindfulness, and creativity. I hope you find something in these pages that adds a little light to your day. :)

All musings, artwork, and photos here, not otherwise attributed, are the sole property of Diana Klein.
%d bloggers like this: