My mother should have stopped me. She should have wrested the fabric and the scissors from my hands and padlocked the sewing machine. But that’s not my mother’s style. A quilt purveyor and sewing instructor for much of my childhood, the bulk of what she’d learned she’d taught herself—from books, from trial and error, from having the sheer gutsiness to reason that if it could be done, then why couldn’t it be done by her? And apparently this belief extended to me because, when, at 17, I hatched the brilliant idea to design and construct my first quilt—a “mosaic” turtle comprising over 1100 1½-inch squares and a few similarly sized triangles—she did not gently explain to me that such an endeavor might be rather challenging and perhaps just a mite beyond my novice quilter status. No, she just nodded her head and smiled. 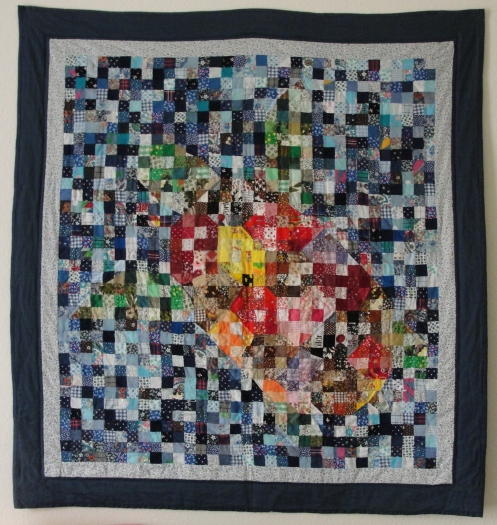 I began by getting out my colored pencils and graph paper and sketching a rough turtle shape. I then decided that I wanted my creation to be as colorful as the mommy-made, rainbow biscuit quilt I snuggled under every night, so I determined that the turtle’s head, legs, and tail would be green, the surrounding ocean blue, and the articulations of the shell would vary the rest of the spectrum. After coloring each square on the graph paper its appointed hue, I raided my mother’s glorious scrap bin, finding a multitude of shades and textures to use in each color zone. I delighted in the many remnants leftover from her projects over the years and, since I only needed to cut a 1½-inch square or triangle out of each, no piece was too small!

Then, the sewing. My mother offered no unsolicited advice at any point during the project, but when I asked how to randomize the squares within each color zone (particularly the blue ones, of which there were many), she suggested I toss them all into a box, mix them up, and sew them together as they came to hand. How thrilling it was to watch them come together, seam by ¼–inch seam, the appearance of the fabrics changing as each new piece was added. I made 33 chains of 36 squares (the triangles now joined together to form squares) and then pinned the life out of those chains, matching seam to seam and piercing each. Throughout this stage, there was a lot of deep breathing, quite a bit of praying, and yes, a fair amount of swearing (especially when, on at least one occasion, I sewed two chains together the wrong way round!), but at long last, the top was done, the mosaic turtle framed by two borders, one light and one dark.

About a year after I started, I completed the 41”x48” piece, hand quilting ¼-inch inside the shell articulations and other body parts. 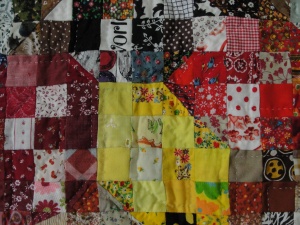 I love all the different fabrics.

After that, I outlined the turtle as a whole, and repeated that outline into the ocean at greater and greater intervals to create a kind of wave pattern. Then my mother showed me how to wrap the back around to the front as a binding and finish it with a hidden stitch. Lastly, the one thing she did insist on, was that I sign the back in embroidery thread. 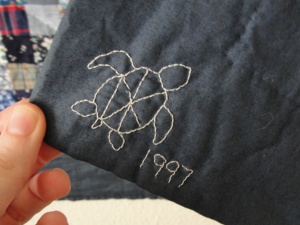 Is the quilt perfect? Ahem, no. Far from lining up properly, many, many seams travel off like little roads to nowhere; the seams beneath the top are folded in a comical variety of directions, making the quilt slight bumpy; and the corners are not quite the 90-degree angles to which a rectangle usually aspires, but whenever I look at it, I smile. I am reminded of the power of the fool—the one who is only one part wisdom to nine parts enthusiasm—too ignorant to believe that trying might be a bad idea, might be too hard, might make oneself look like, well . . . a fool.

I still can’t believe my mother didn’t try to talk me out of it. She just sat back and let me create and I can only thank her for that, especially because with all her skill and all the beautiful things she’s made over the years, that quilt still hangs on her bedroom wall.

P.S.  I have to admit, I had an added motive for publishing this post.  It’s in response to a Quilting Daily challenge to write about one’s first quilting project and if I win, I get to pick 5 items from Interweavestore.com (sigh).  Here are my choices: Watercolor Markers Supply Kit; Hand-Carving Premium Collection; New Tatting; Friendship Bracelets All Grown Up; and The Art of Whimsical Lettering.  What would you choose?

12 thoughts on “The Foolish Quilter”

Hello and welcome! I am a writer, harpist/singer, artist, and crafter living with chronic illness. My goal is to live joyfully and wholeheartedly through compassion, mindfulness, and creativity. I hope you find something in these pages that adds a little light to your day. :)

All musings, artwork, and photos here, not otherwise attributed, are the sole property of Diana Klein.
%d bloggers like this: